Hello everybody and welcome to the first ever issue 26 of the Spirit Spotlight, the write up of the best spirits you can find at The Dial. This issue we are looking at the popular and tasty Nelsons Rhubarb and Custard gin.

Some of our customers might know we are quite the fan of Nelsons Gin, and so are our customers judging from how often we crack open the wax on a new bottle. Not only is it a great gin that we use in our cocktails but it is also one of the more local gins we have to offer. Based in Uttoxeter Nelsons gin is one of the only gins made on the Derbyshire Staffordshire borders and was created by one top man, Neil Harrison. Neil knows a thing or two about creating a taste sensation from his work as a chef and the aim was to create a gin that walks the perfect line on balancing flavours, making a memorable flavour and creating the right presentation.

Neil spent two years researching the best combinations of botanical ingrediants from around the world. During that time he attended a local gin school 7 times, making 7 batches before finally mastering the final secret recipe, thus the first gin Nelsons Gin was born, No.7.

But why call it Nelsons? Why not Neils? Well according to legend, for over 200 years, no ship of the Royal Navy left port without its supply of Navy strength gin. The term ‘Navy Strength’ correlates to the origins of the term ‘Proof’ in the alcohol world. It means that the spirit contains enough alcohol to still be able to combust. Officers had to douse gunpowder in the spirit as a test of its potency, if the wet gunpowder still ignited, it was ‘proof’ the alcohol content was high enough. Anything weaker would soak the gunpowder rendering it useless and the ship defenceless. Yet it was an altogether subtler spirit which allegedly inspired Lord Nelson , a complex and aromatic gin produced only on the island of Menorca, which was at one point Lord Nelson’s base. Lord Nelson would become Englands greatest naval hero, noted for his leadership, grasp of strategy and unconventional tactics. Because of this and the navy strength history, Nelsons Gin is named after Lord Horatio Nelson, but it is also named after the inventors’ grandfather, to honour Nelson James Harrison. 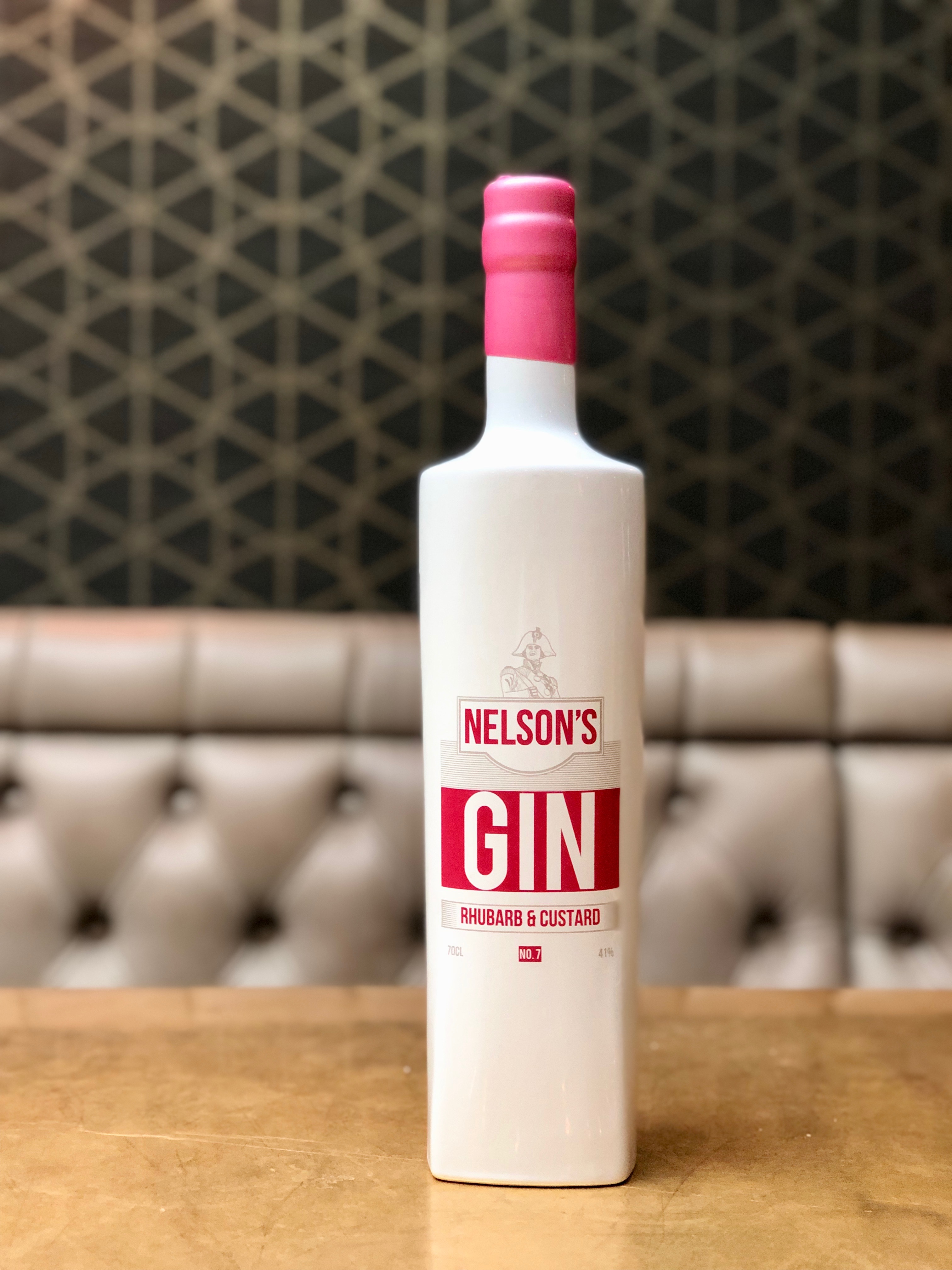 To make Nelsons Rhubarb and custard, water is locally sourced in Staffordshire and filtered in a reed bed. The reed bed Is a natural filtration system, the water flows into the reed pond and the reeds filter out any unwanted elements. The water is then put through a state of the art resin filtering system where it is scanned and tested before it is used in the gin.

The gin is crafted in small individual batches and bottled produced by Wade Ceramics. Each batch is distilled, bottled and wax dipped by hand.

Nelson’s Rhubarb and Custard Gin takes the recipe for the original London Dry Infusing fine and pleasingly original botanicals from across the globe, such as lemongrass and kaffir lime leaves from Thailand, vanilla from Madagascar and cinnamon from Sri Lanka and adds sweet, natural rhubarb essence. This can be enjoyed neat as well as with tonic.

I hope you enjoyed this spotlight and reading about one of our popular gins, if you haven’t tried it yet, just ask us at the bar.