Hell everybody and welcome to the first ever issue 29 of the Spirit Spotlight, the write up of the best spirits you can find at the Dial. This issue we are looking at the critically acclaimed Monkey 47 Schwarzwald gin. To do that we need to travel to the black forests of Germany and delve into the history of Wing Commander Montgomery “Monty” Collins of the Royal air force.

Monty posted to the British sector of divided Berlin, an eccentric man with a passion for life. He had many interests, watches, cricket and globetrotting among them. While posted he discovered the power of language and learned 5 languages, this is a man with a lot of interests and a passion for learning all about them.

While in Berlin he was affected by the devastation caused by the war and resolved himself to helping the reconstruction. Particularly in his free time he helped the rebuilding of Berlin zoo where he sponsored an egret monkey named max.

Monty left the Royal air Force in 1951 and moved to the Northern Black Forest region to pursue his interests. In particular watch making, but it turns out we cant all be good at everything and he lost interest soon enough. Instead he opened a country guesthouse named “Zum wilden Affen” or the Wild Monkey, named in honour of Max, the monkey he sponsored in Berlin. The Origins of the Monkey 47 name are starting to be more clear now right?

While running the guest house Monty liked to keep British traditions and among them are having a good glass of gin! Being the man he is, just having a drink of the stuff wasn’t enough, no he decided to start maing the good stuff. Juniper was in abundant supply in the black forest region as well as pure well water and numerous other botanicals. He was in the perfect location to create his own gin.

His story gets rather vague by this point but in the early 1960’s during renovation on the guest house, a wooden box was found, its contents; a bottle and note. On the bottle was a hand drawn sketch of a monkey, titled “max the Monkey – Schwarzwald dry gin”. The letter contained notes, photographs and a detailed description of the 47 plant ingredients used in making the gin. The origins of Monkey 47 was discovered and during the 60s to the 70s, Max the Monkey gin was the drink of the guest house. 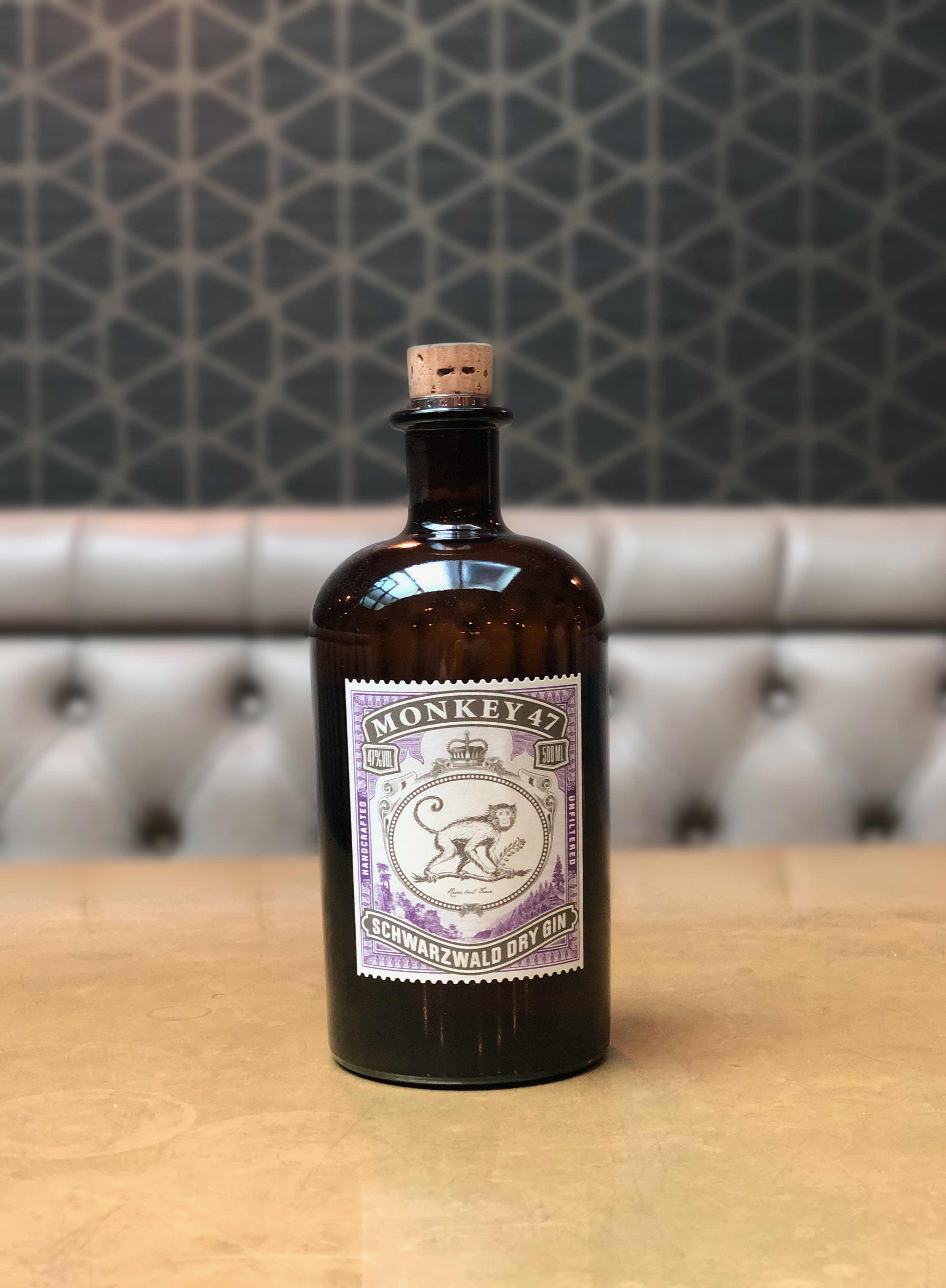 This story is what led to Monkey 47 being produced in the Black Forest distillery, dubbed the Wild Monkey in Germany to this day.  From here they harvest all 47 unusual (for gin) botanicals, the most interesting and advertised are the lingonberries used to give its distinct flavour. And I just thought you only got them at Ikea.

Southern Germany happens to be one of the best places in the world to create new spirits. The people there have a long history of making fruit liqueurs, brandies and being home to coppersmiths experienced in making stills.

After two years of research the perfect recipe was creatied to refine max the monkey gin into Monkey 47. Yes there are 47 ingredients, I could list them but whats important is it makes a complex gin. Every time you have a glass you may find different tastes or aromas. Sure you can’t taste every individual ingredient but they are all in there working to create the one of a kind gin that it is.

With all that in mind we recommend you try it with any classic gin cocktail. Try in a bramble, a negroni,  a gin martini, just try it and the Monkey will not disappoint.

That’s all for this issue of the Spirit Spotlight but if you would like us to look at your favorite spirit, don’t forget to let us know on any of our social platforms or simply at the bar.